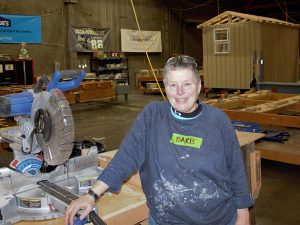 The first 18 months that Sound Foundations NW was in existence, we built our tiny homes at a tiny home village called Camp Second Chance.  We were in a Quonset hut that we called The Big Tent.  Because the building had a canvas roof and sides, I could hear most everything that happened in the village.

This was also before Covid, and many of the residents built with us and became our friends.  As we hammered and painted, we learned about each others’ lives.

I tell the following story to every new volunteer at Sound Foundations NW.  It is based on my involvement with this organization.  Everyone who has heard this story, from Case Managers, Site Supervisors and residents in the Tiny Home Villages and those who are currently still living on the streets have agreed that the information I present is correct.

You and I live in a tent encampment.  It’s around noon.  You have a sandwich, and I am hungry.  You set your sandwich down and go inside your tent.  Am I going to steal your sandwich?  You bet I am because I’m hungry.  You come out of your tent and say, “Barb, did you steal my sandwich?”  I reply, “Oh no…” Now I’m a liar and a thief, just like that, all because of circumstance.  Do you see how quickly that happens? 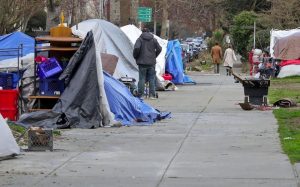 sandwich.”  Now, not only do you not trust me, you don’t trust many of the folks that are around you.

Homeless folks live in a world of mistrust.  Many have been on the streets for so long that they don’t even realize how traumatized they are.  They are really “blind” to the world around them.  They are only thinking about two things:  “What am I going to eat?”, and “Where am I going to sleep?”  Many can’t get a job because if they leave their things in their tent, chances are their only possessions will be gone when they return.  Statistically speaking, 70% of all homeless drug addicts did not use drugs before they became homeless.  If you look at the faces of most homeless folks, they have a really hard edge to them, and with good reason.

One day, someone from Seattle’s HOPE team (https://www.seattle.gov/humanservices/services-and-programs/addressing-homelessness/hope-team) comes to visit you.  Like everyone else, you initially do not trust them.  They talk to you, get to know you as a person (which is rare in your world), know where there are available tiny homes in the various villages, and eventually find you a tiny transitional home to live in.

So now you go to the tiny home village for the first time.  The Case Manager hands you the keys to your home.  Every single resident I have seen open their door for the first time looks like this (mouth gaping open.)  You put your stuff down, and the Case Manager then takes you to the kitchen where you eat what you want, and then you go to the pantry to get clothes, toiletries:  whatever you need.  You spend the first three or four days just being in your tiny home.  My friend Larry told me that when he first went into his tiny home in January, he laid in bed for four days and just listened to the rain.  In the past 12 years, it was the first time he heard the rain and was not wet.  We talk about helping people become “warm, safe, dry and with Covid, healthy”.  That’s the “dry” part.

Those first few days, you only venture out to go to the bathroom, take a shower and go to the kitchen.  When you are in the kitchen, you grab as much food as you can.  Another resident who has been there longer tells you, “It’s OK.  You don’t need all that food.  There will be food here tomorrow.”  You sigh a little, and that hard edge on your face softens just a little bit.  Baby steps.

It’s been about a week, and you venture out and meet some of the other residents.  The advantage that the tiny home villages have is that there is always a fence around the village.  Many of us always thought that this was so the 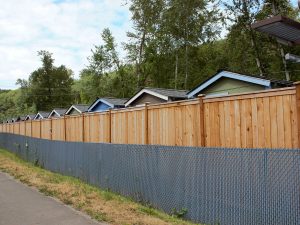 NIMBY’s (“not in my back yard” folks) wouldn’t have to look at the tiny home residents.  What the fence actually does is to protect the residents from the “haters” outside the fence that will do many things to homeless folks that we cannot even imagine.

Another advantage of the tiny home village is that they are all self-governed.  Each week they meet to establish the rules of their village, work through any conflicts, and plan events.  They also all take turns doing security shifts which involves not only walking the village to make sure everyone is safe, but also cleaning the kitchen, bathrooms, showers, laundry facilities, and picking up litter inside and outside of the village.

What really happens inside the village is that the formerly homeless folks learn about community for the first time in a long time.  I’ve spent a great deal of time researching how other communities around the United States have ended or are ending homelessness.  If you understand nothing else about this article, please know this.  Homelessness is not about a lack of a home.  Homelessness is about a lack of COMMUNITY.

Those of us who are housed cannot just approach the tiny home village residents and say, “This is what you need to know and how to live in community.”  That never works.  What we need to do, and what the villages do, is to provide an environment for them to teach each other about community. 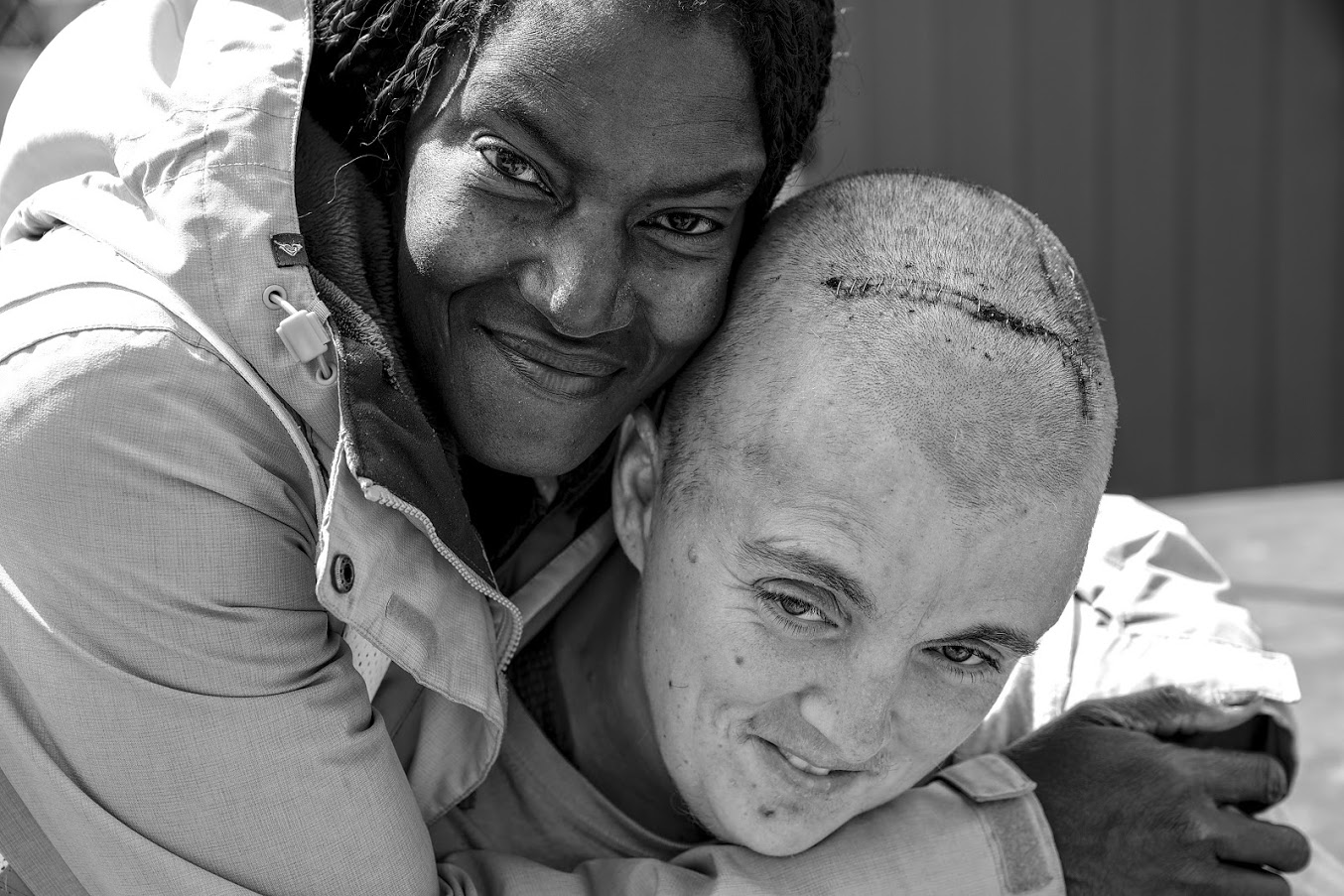 More often than not, when I was building in The Big Tent, I would hear, “(Knock.  Knock.)  Hey Marvin.  Haven’t seen you in a while.  Are you doing OK?”.  One of my friends who was a resident at Camp Second Chance found out she had brain cancer.  The other residents of the village were there to bring her food, take her to the bathroom and shower, made sure she got her meds on time, and those with cars took her to the doctor.  She would have easily died on the streets.  Now, not only is she cancer free, she is in her permanent home and is THRIVING.  We should all be so lucky to be in such a great community as Camp Second Chance.

OK, so now you’ve been living in your tiny home for about a month.  You meet Jerry who has found a job through the Case Manager of the village and has just bought a car:  not a new car, but one that is reliable that will get him to work and back.  You talk to David who is working on his four-year degree in Architectural Engineering, and Rachel who just got her certificate for over-the-road truck driving.  You are thinking to yourself (and admit it, we all do this!)  “I’m no better than Jerry.  Why does he have a car and I don’t?”  “I’m smarter than David.  Why is he going to school and I’m not?”  “Rachel got her certificate.  I want to be a welder.  Why can’t I do that?”

Now you walk into the Case Manager’s office and say, “I want to be a welder.  Why can’t I go to school to do that?”  To which your Case Manager replies, “You can do that.”  You say, “I can?”  Your Case Manager says, “Sure.”  You sigh.  Your eyes light up.  You get a little softer.

Recently I was a guest on a national podcast (Episode #11 of    https://www.operationtinyhome.org/hope-innovation-impact-podcast)  They asked me the question, “What is your definition of hope?”  My definition of hope is “the belief in the possible.”  When you were living in that tent, you had no belief that you could ever become a welder, right?  Now, in the tiny home village, whatever you can dream, you can do.

The “transition” in the tiny home villages is not only a physical one:  going from the streets to a tiny transitional home to permanent housing; but also, a transition that happens in your head and your heart from being scared to being safe to being well, even thriving!  If the “head and heart” transition doesn’t happen, you can put a homeless person in a mansion on Mercer Island, and they will still eventually still end up homeless.

There is a global initiative to end homelessness called Built for Zero (https://www.joinbuiltforzero.org)  The main tenant of that initiative is 1) know every homeless person by name, 2) find out what they need, and 3) provide the services.  Sounds simple, right?  But how do you do that for the thousands of homeless folks living on the streets in Seattle and King County?  Very simply, one 35-50 person village at a time.  In other words, eat the elephant one bite at a time.

Homelessness is a very complex problem with many solutions.  In my opinion, the first thing we need to do to end homelessness, before anything else, is to get folks off the ground and into a space that is warm, safe, dry, and healthy.

Seattle’s Mayor Bruce Harrell has made ending homelessness a priority.  When he visited our facility called The Hope Factory, he spent two hours touring our assembly-line style build system and talking candidly with our volunteers.  When he left, Bruce told us that the tiny transitional homes were “the first, best solution to homelessness.”  We agree. 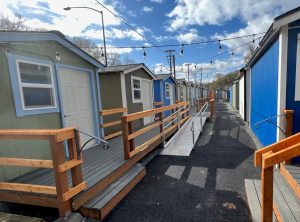 Sound Foundations NW has built hundreds of transitional tiny homes, yet there are still thousands of folks on the streets.  Sometimes it’s frustrating:  like bailing a boat with a teaspoon.  I visited one of the new tiny home villages last December.  In a home that we built, the front window is rimmed with holiday lights and there is a sign in the window that says, “Joy to the World”.  I know that we have made a difference in at least that person’s life.  Their holidays will be different than laying their head in a tent surrounded by garbage and rats.

In the past six months, with the help of hundreds of incredibly dedicated volunteers at both Sound Foundations NW and the Low Income Housing Institute,  more tiny home villages are up and running.  Hundreds of homeless folks are now off the streets: warm, safe, dry, and healthy.

There is hope.  The good news is that HOMELESSNESS IS SOLVABLE.  Larger cities like Detroit, MI and Jacksonville, FL are already well on their way to ending homelessness.  We can too.  And we will.